G.I. Dog: The Family Dog and More About Qeah 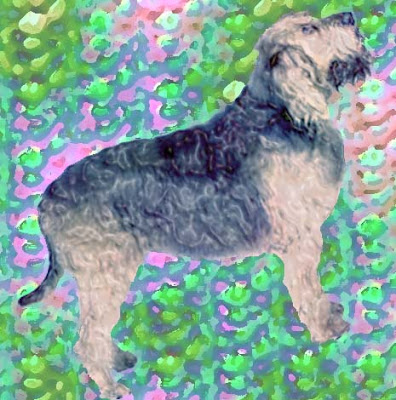 G.I. Dog is the family pet, a mixed-breed puppy given to Quinelle and Qeah by their father (as yet, unnamed) shortly after 9/11, as sort of consolation prize for their missing mother (Godwyna).

Quinelle names him G.I. Dog because he looks a bit like camouflage (I've tried to show this with the above image). In reality, he is large and shaggy, unkempt looking, simply because the girls, once on their own, do not have the resources or the wherewithal to have him professionally groomed.

Don't get me wrong; they comb and bathe him regularly--and sheer him somewhat irregularly, giving him a really shaggy look, except those times when they sheer him rather haphazardly, either too much or too little.

As Quinelle and Qeah grow older and their financial situation improves dramatically, G.I. Dog is taken to the groomer regularly, so as an old dog, he looks better than ever.

I'm getting the sense that G.I. Dog will act as a metaphor for their family life as kids alone. (For those who stumble upon this blog, please note that these are notes and not part of the novel. In other words, I won't be saying in the actual novel that G.I. Dog acts as a metaphor, LOL).

Throughout the novel, G.I. Dog grows up with the girls.

But as G.I. Dog grows old and creaky, the girls are just coming of age and into their young adulthood (Quinelle) and late teen hood (Qeah).

His death will coincide with a new chapter in the girls' live.

G.I. Dog is definitely at odds with his name. Any similarity to a military dog ends with his camouflage coat.

He is a big dog, a lovable curly-haired mutt who would not hurt a fly. He adores his owners, preferring Qeah over Quinelle, obsessively following the younger girl around; however, he would give his life for either of them, which he will prove somewhere in the novel (haven't decided when and where yet).

He's a laid-back animal (a bit slobbery, his tongue hanging out a lot) who sleeps a lot (when he isn't following Qeah around). Especially when he's younger, the girls are always trying to get him to exercise more, which he resists as much as possible. As he grows older, the girls don't bug him as much, apparently recognizing him as the elder statesman of the family deserving respect and an easy old age.

His fears: thunder and lightning, vacuum cleaners, the mail carrier, and sirens. As a puppy, he fears the girls' father, often cowering in his presence.

But he loves swimming, eating, playing games with the girls, and sleeping at the foot of Qeah's bed.

Also, while Qeah is not the main character, she will be more like me when I was a child. As a youngster, I didn't have access to computers and the internet, but I suspect I would have embraced technology, just like Qeah does, given that I have as a woman of a certain age.

Qeah has even set up a website for G.I. Dog (GIdog.com, which, for now redirects to this blog). She buys the domain name on the aftermarket and, to Quinelle's horror, pays quite a large sum for it. (Quinelle slowly discovers that Qeah has built up a mini internet empire and a healthy bank account.) Of course, since I own the domain, she'll have to buy it from me, ha!)

Qeah has a slight weight problem, her name is unusual (therefore, she gets teased about it and her weight; when I was growing up, my first name was considered unusual), and she goes her own way in school. In other words, she's a reluctant student (although she is far from being a reluctant learner).
Posted by j at 1:30 PM

For those of you coming from smut sites, expecting dirty content:

You might as well move along because you will be disappointed.

This Young Adult NaNo Novel may contain complicated issues regarding teens and their relationships with parents, relatives, school, significant others, and friends, but never anything nasty, exploitive, or compromising.

So all smutties, go back to your dark corner of the internet.

Everyone else is welcome!